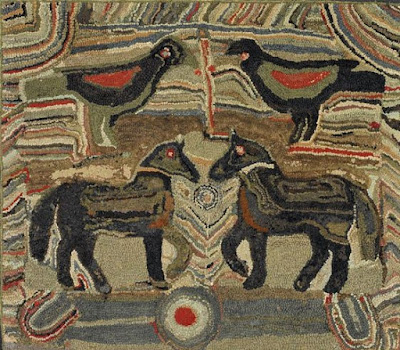 After receiving lots of interest on my previous post about the eBay rug --- Inlaws Are Rodents, I thought you might enjoy the story behind the 100+ year journey of one of Magdalena Briner Eby’s hooked rugs --- Two Crows & Two Horses...photo above... 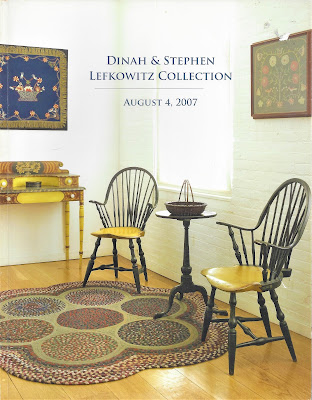 In Manchester, New Hampshire, on August 4, 2007, the vast collection of Dinah & Stephen Lefkowitz was auctioned at Northeast Auctions. Among the 254 items were approximately 30 hooked, sewn, appliqued & braided pieces, one being Two Crows & Two Horses. Here is an excerpt from the auction catalogue forward by Helaine Fendelman, an appraiser & authority in the arts, antiques, and collectibles:

About 20 years ago Dinah & Stephen began their own collecting odyssey focusing on design, color and form. The couple fell in love with an 18th century house in Old Saybrook, CT. One day Dinah awakened and realized this new old house had 16 rooms which needed to be filled. And Stephen, as he looked out the window over the waterway in from of the house, knew that a well-designed knobby Windsor chair was the perfect addition to this room. A passionate love affair for the form and design of the chair culminated in the eventual acquisition of some 28 Windors! The original painted surfaces, red, brown or black and sometimes multiple colors, combined with the turnings and the shapes of the stately chairs, literally enveloped the collecting couple and charmed them.

Dinah & Stephen traveled to antiques shows, they literally fell in love with paint decorated furniture! As their passion increased, Stephen, ever the scholar, began to build a library and study Connecticut River Valley furniture. He learned form, condition and surface as can be seen in the intricately detailed bed and table covers with colorful outstanding images. The HOOKED RUGS, especially the brightly hued star, as well as the bed and table covers resemble paintings! Even though both Dinah & Stephen purport to be minimalists, they filled the house and their New York City home with pristine examples of paint decorated furniture including blanket chests, corner cupboards, tall chests, Windsor chairs, baskets and pieces of sculpture, the beautiful decorative objects seen in this catalogue.

Even though I never met Dinah & Stephen, I’ve met many couples just like them. Couples who have a love affair with each other, and for or because of their long adventure of collecting antiques. Helen & Steven Kellogg are another example, one day I’ll post their story - of just such a love affair and their collection of Magdalena hooked rugs. (Steven generously loaned me Magdalena rugs for the 2011 Rug Hooking Week at Sauder Village – Feature Exhibit: Magdalena Briner Eby & Evelyn Lawrence.)

On the cover of the Northeast Auction catalogue above, you can see some of the other Lefkowitz hooked, sewn, appliqued, and braided rugs. I thought you might enjoy seeing a few more: 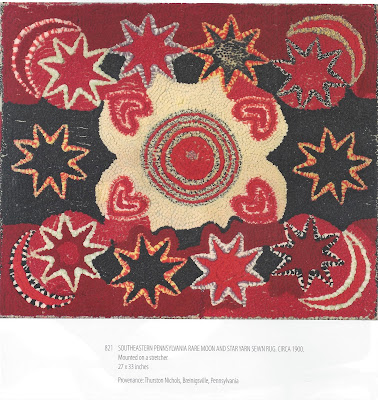 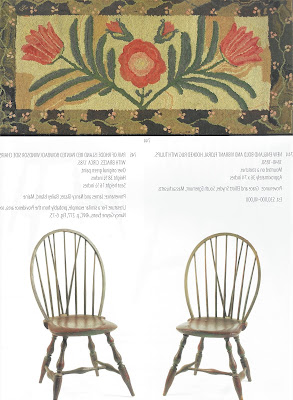 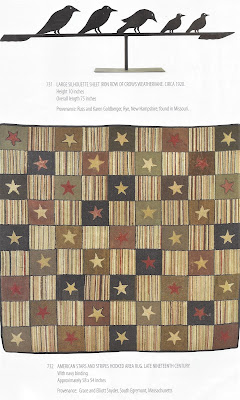 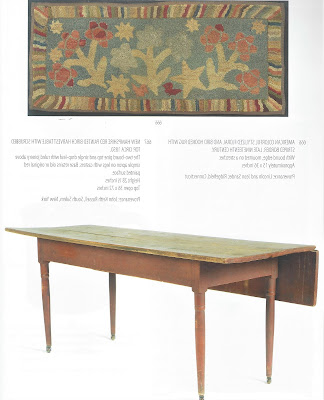 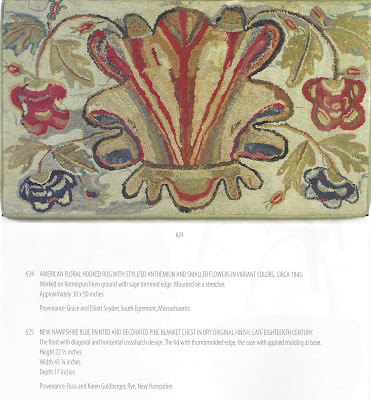 Now, back to the focus of this post… The Two Crows & Two Horses rug has been on a 100+ year journey since it was hooked by Magdalena, most likely between 1849-1915. That journey has influenced and impacted both the maker and the hooked rug itself. Most of the time, we have absolutely no information on the journey of an antique, nor the maker. But luckily in this case - we do!

Sometime in the mid-1960s, after the death of Magdalena’s granddaughter Grace (McKeehan) Greaney, Grace’s descendants had an estate sale of her household goods and furniture, at the New Bloomfield House (photo below). At the time of the sale, the family also contacted and invited antique dealers. During my research interviews, dealers recalled that the house, attic, cellar, garage, and outbuildings were filled to the brim with amazing antiques such as wonderful old cupboards with original paint, beautiful quilts, countless hooked rugs, and much more. Since the hooked rugs were viewed by the family as utilitarian in nature, and/or because some were quite worn, a number of them ended up on the burn pile. Keep in mind, in the 1960s hooked rugs had not yet reached their 1970s peak in both value & collectability. 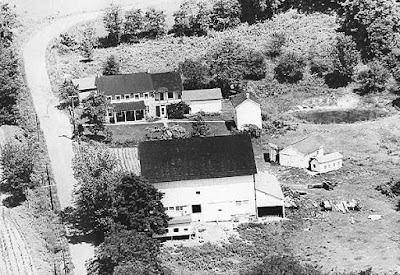 1970s peak... had much to do with Joel & Kate Kopp and their New York City shop America Hurrah (photo below), which was filled with wonderful examples of American antiques, quilts, & hooked rugs. As antique dealers, they shared their insight into the importance of Americana with their customers and collectors. They also wrote the book American Hooked & Sewn Rugs, with 3 printings & slightly different rugs (photo below). (If you’ve ever heard me speak, most likely you will have heard me praise & credit the Kopps for their contributions to recharging and re-establishing the interest, value, and collectability of American hooked rugs. See more Kopp info on page 7 of the Hutchinson book.) The Kopp book was encouraged by Lee Cogan, Curator, American Folk Art Museum, New York City, who both had an intrinsic interest & supported the textile art of hooked rugs. Lee invited the Kopps to curate & exhibit their hooked rug collection. The 1974 exhibit was titled: Hooked Rugs in the Folk Art Tradition at what is now called the Museum of American Folk Art. 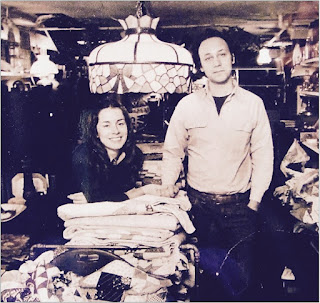 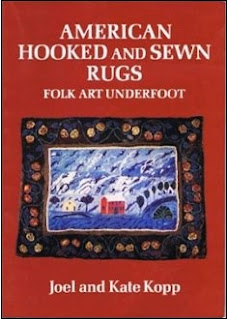 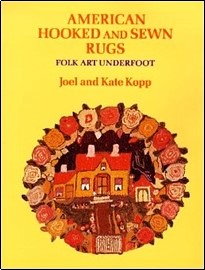 Now, back to the antique dealers who purchased Magdalena hooked rugs at the estate sale. Some of those hooked rugs were sold at the Black Angus Auction in Adamstown, Pennsylvania. Much like the Brimfield, Massachusetts sales, Black Angus was known as a place to find and buy wonderful antiques. Two Crows & Two Horses was one of the Magdalena rugs that started its journey at Black Angus. From there, it traveled in and out of the hands of a number of antique dealers and collectors (which is listed in our book), until it reached Dinah & Stephen in about 2006. They didn’t own this rug for very long before they sold it at the Northeast auction in August, 2007. The buyer was Olde Hope Antiques who paid $37,120. (I think that they specifically bought it for a collector, who lives in Bucks County, Pennsylvania & has several hooked rugs, and possibly more Magdalena hooked rugs.) This was not the first time that Olde Hope had owned a Magdalena hooked rug, they have bought and sold Domestic Zoo a number of times - once to Johnson & Johnson heiress Barbara (Christina) Johnson. (Another wonderful collector, who deserves a future Blog post with photos & notes from my 2009 visit to her home & collection.) Around 2004, Domestic Zoo was purchased by Olde Hope Antiques at Northeast Auction for $74,000, in a later sale it sold for over $80,000.

Below is a photo of a hooked rug (currently) for sale by Olde Hope Antiques:

Below are hooked rug photos of Dog and Cats followed by Dog, Feathered Friends, and Turtle, which were documented in our book. You can see the similarities in the dog, bird, cat turtle motifs, as well as background styling and overall colors. 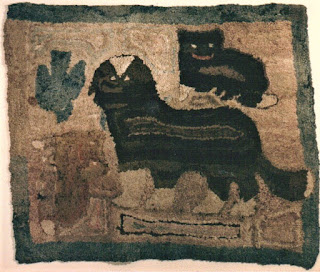 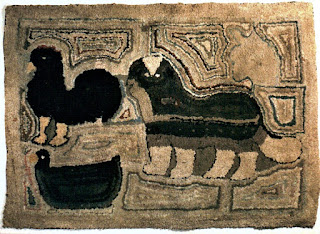 Below is another hooked rug from our book called Dogs, Cats, Birds, and Turtle. This one was once owned by antique dealer - Blanche Greenstein of Woodard & Greenstein. Blanche liked this rug so much, that it hung in her home for about 25 years, before she sold it. Again, note the similar cat, bird and turtle motifs. 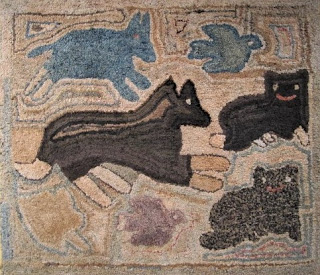 Two Crows & Two Horses, as well as Domestic Zoo, have pedigree provenances due to their documentation and owners, plus their appearance in publications and exhibits. This establishes a premium value. So, while Magdalena’s hooked rugs may have "originally" sold for much less than $100 each, some have appreciated to the selling price of tens of thousands of dollars, or even $100,000 and up. A simply amazing journey!

With that said, this goes back to the “pricing/value” info, which was discussed in the eBay rug - Inlaws Are Rodents post… in which the best advice being “beware & be educated” before you take the plunge into buying and collecting antique or vintage hooked rugs. Look for the documentation and then research it as much as possible.

But let’s not forget Magdalena’s own personal journey. Primarily the rugs that she, a domestic housewife or homemaker, hooked were for utilitarian purposes, and to decorate the home. The fabrics used in her rugs were primarily cut up old clothing, along with left-over scraps of quilting fabric. In today’s terms, that’s known as the very trendy “recycle, repurpose, & upcycle” movement. But in Magdalena’s lifetime it was simply: Waste not, want not --- if you use a resource carefully and without extravagance you will never be in need. We have already discussed the 100+ year journey of her hooked rugs, but over the 106 years since her death, Magdalena has been elevated from a domestic woman to an American Folk Artist, and an innovative Recycling Upcycler! Quite a promotion!

Besides the ever-increasing value of her rugs, why is her personal elevation significant? In general, and historically, (domestic) women who create art are highly overlooked, greatly under-valued, and rarely documented. That was a common issue which brought my co-authors & I together - to tell the artists stories, document their work & acknowledge them.

Then, for Magdalena, Evelyn & I couldn’t stop with just her book, it was our joy and privilege to go on to support the 1st Trail Rug (dedicated to Magdalena) on the National Quilt Trail at Tuscarora State Forest, and campaign, fund raise, and erect the 1st historic marker dedicated to rug hooker-Magdalena in time for Perry County, Pennsylvania’s 2020 Bicentennial celebration. It gives us great pleasure in seeing others appreciate and enjoy Magdalena’s work, & now it’s out there for generations to come, through her book, Trail Rug, historic marker, & the generous donation of the Great-Granddaughter's Hooked Rug to Perry County, Pennsylvania.

For more information on MBE, her hooked rugs & more:

For more information on the Lefkowitz auction: