Did you know that Presidents Day was originally established in recognition of President George Washington? 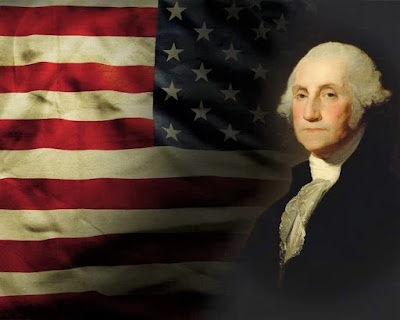 The story of Presidents' Day date begins in 1800. Following the death of George Washington in 1799, his February 22 birthday became a perennial day of remembrance.

At the time, Washington was venerated as the most important figure in American history, and events like the 1832 centennial of his birth and the start of construction of the Washington Monument in 1848 were cause for national celebration.

While Washington’s Birthday was an unofficial observance for most of the 1800s, it was not until the late 1870s that it became a federal holiday. Senator Stephen Wallace Dorsey of Arkansas was the first to propose the measure, and in 1879 President Rutherford B. Hayes signed it into law. The holiday initially only applied to the District of Columbia, but in 1885 it was expanded to the whole country.

The shift from Washington’s Birthday to Presidents' Day began in the late 1960s, when Congress proposed a measure known as the Uniform Monday Holiday Act. Championed by Senator Robert McClory of Illinois, this law sought to shift the celebration of several federal holidays from specific dates to a series of predetermined Mondays.

The proposed change was seen by many as a novel way to create more 3 day weekends for the nation’s workers, and it was believed that ensuring holidays always fell on the same weekday would reduce employee absenteeism.

The Uniform Monday Holiday Act also included a provision to combine the celebration of Washington’s birthday with that of Abraham Lincoln, which fell on February 12. 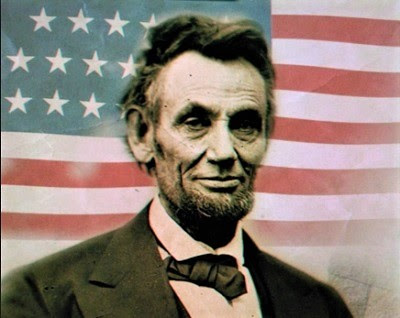 George Washington was a common figure in the hooked rugs attributed to James & Mercedes Hutchinson. Their Washington themed rugs sold as well in the 1920s-1950s as they do today, mostly due to their popular & collectable Americana theme.

In celebration of Presidents Day, we hope you will enjoy this collection of Washington themed hooked rugs by the Hutchinsons.... 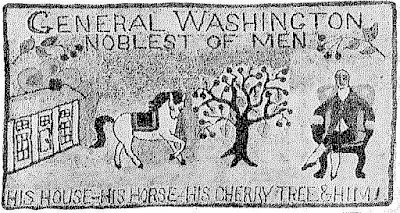 General Washington
Noblest of Men
His House - His Horse - His Cherry Tree & Him!
This B&W photo is from the Parke-Bernet
Auction Catalogue #798, where it originally sold in 1946. 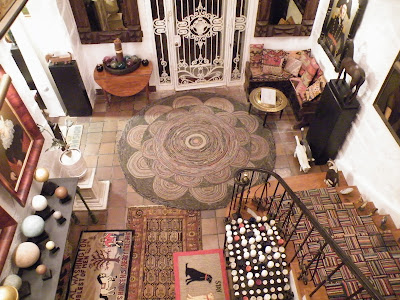 The photo above was taken by Kathy Wright during a
visit to Barbara Kristina (Piasecka) Johnson's Princeton, New Jersey
estate in 2009. In Barbara's entry, you can see a similar Washington
rug on the floor (left front). However, if you look closely at this rug,
see below, you will see some notable differences in the house, horse, George's chair, lettering, etc. So Barbara's rug is not the same as the Parke-Bernet rug, B&W photo above. Is Barbara's an original Hutchinson or was it done by a contemporary artists? We don't know... 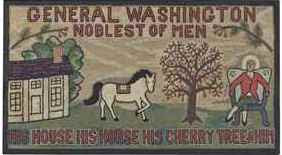 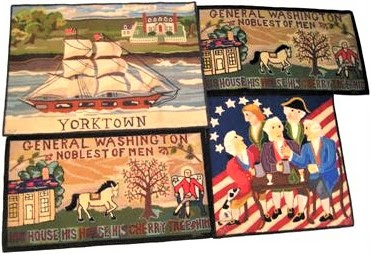 But we do know...
In the photo above, there are 2 examples of the Hutchinsons'
General Washington - Noblest of Men design - which were adapted slightly, reproduced, hooked with yarn, & sold by Claire Murray So there are a number of reproductions out where in the world. 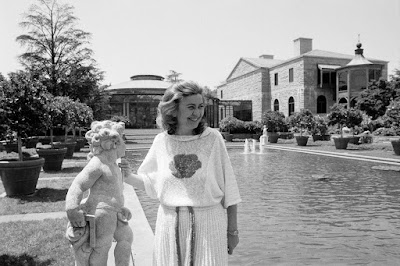 Barbara Kristina (Piasecka) Johnson
The Johnson & Johnson pharmaceutical heiress was one of the most respected hooked rug collectors in the U.S. Her hooked rug collection was sold at several auctions after her death in 2013. She also had many other collections, of which were a decoy collection & whaling collection. Over the years, she would get calls from museums & even the White House to borrow her collections for exhibits & state dinners. 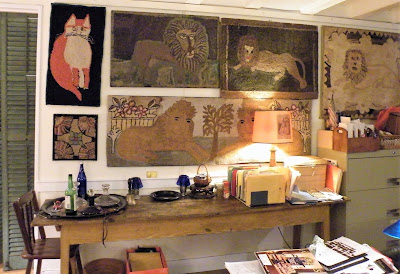 This is only one small wall of hooked rugs, which was in her office. 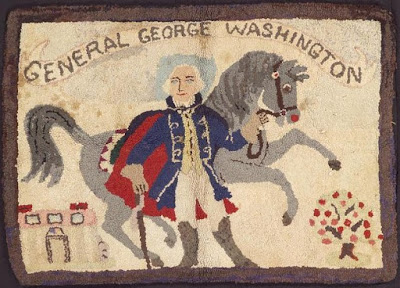 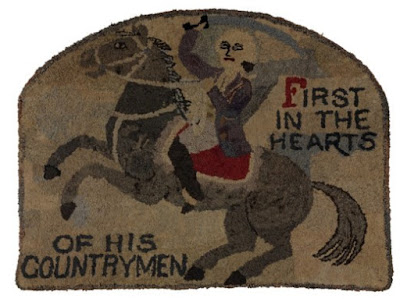 First in the Hearts of His Countrymen
When the book - Rug Hooking Traditions with James & Mercedes Hutchinson was printed, we didn't have a photo of this Washington themed rug. 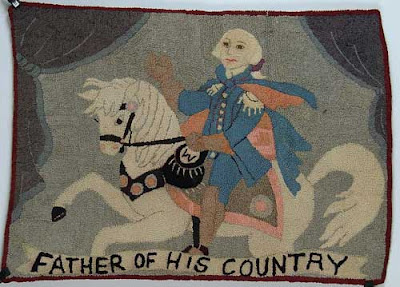 Father of His Country
Above & below are two versions of this rug. Many collectors &
antique dealers claimed there were no two Hutchinson rugs with
the same theme, inscription or motifs, this is just one
example that research proved this theory to be incorrect. 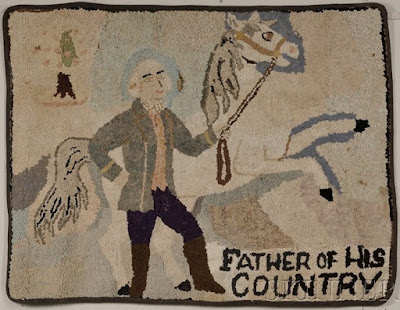 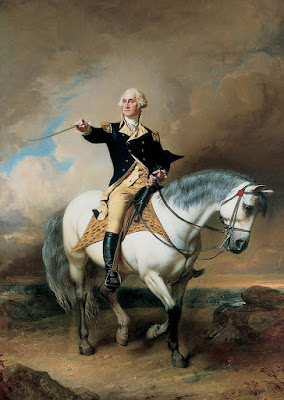 Blueskin was a (light) gray horse ridden by Washington, photo above. He was one of Washington's two primary mounts during the American Revolutionary War. The horse was a half-Arabian & said to have been obtained from the Sultan of Morocco. Blueskin was a gift to Washington from Colonel Benjamin Tasker Dulany of Maryland. Dulany married Elizabeth French, a ward of Washington's, who gave her away at her wedding to Dulany on February 10, 1773.

Nelson was Washington's other primary riding horse, a gelding said to be calmer under fire than Blueskin. Of the many horses that Washington owned, Nelson was a favorite and carried General Washington almost always during the American Revolution War. Described as a "splendid charger," the animal stood sixteen hands high, and was a light sorrel or chestnut in color, with white face and legs.

Both horses were retired after the Revolutionary War. Blueskin lived at Mount Vernon, until he was returned to Mrs. Dulany in November 1785.

Blueskin, due to his light gray, almost white, hair coat, was the horse most often portrayed in artwork depicting Washington on a horse. The Hutchinsons also chose to primarily depict Blueskin in their Washington themed hooked rugs.