Sharing a bit of James & Mercedes'

unique brand of "Hutchinson Humor" in reference to...

We hope you enjoy these rugs & our interpretations. 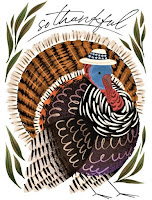 Catalogue Description: Thanksgiving Rug - Portraying a family seated about the festive board avidly eyeing a turkey about to be served at the table, all in colorful costume; a banderole at the top inscribed A Noble Bird.

Interpretation:  Dad, seated at the head of the table on the right, holds a large carving knife & fork. At the other end of the table the large roasted turkey makes it's grand entrance. Everyone is wide eyed & you can almost see their mouth's watering, even the family pet. Don't you love the charming eye glasses on, what could be, Grandma & Grandpa? And do you think the girls in the front are twins? 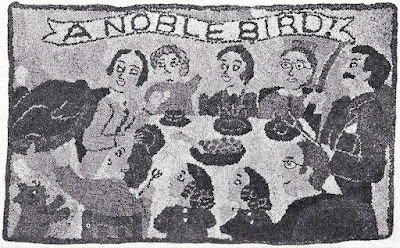 Advice to the young bride rug

1941 Catalogue Description: Advice to The Young Bride Rug - Shows her two hands carving a turkey and admonishes against the pitfalls of early married life.

Interpretation: Unfortunately, a photo of this rug has not yet been found. But, as you review the next rug....Could it be one in the same rug? The timing is about right & the description has much in common.

Let This Carpet Serve To Guide,

A Young Wife By Her Fireside,

A Man May Coy With Too Much Kissing,

1942 Catalogue Description: Advice To Young Wife Rug - Announcing Let This Carpet Serve To Guide A Young Wife by Her Fireside, A Man May Coy with too Much Kissing and Think of His Mother's Food He's Missing. The food carved by mother's hand also depicted.

1945 Catalogue Description: Advice To Brides Rug - Depicting two hands in the act of carving a turkey, on each side a deep bowl with spoon, on a blue ground border of fruits and vegetables; inscribed Let this carpet serve to guide / a young wife by her fireside / A man may coy (sic) with too much kissing / & think of his mothers food he is missing. (Hutchinson) 3 feet 11 inches x 3 feet 2 inches

1956 Catalogue Description: Advice To Young Wives Rug - Showing a pair of hands carving a turkey, within a border of stylized vegetables. Inscribed Let This Carpet Serve To Guide / A Young Wife By Her Fireside / A Man May Coy With Too Much Kissing / & Think Of His Mother's Food He's Missing. (Seller - Western Museum) 3 feet 11 inches x 3 feet 2 inches

Interpretation: This Inscription may have appeared on one, two or even three rugs, it is unclear, perhaps resold or perhaps it sold well the first time and another was created with the same inscription. Or perhaps it didn't sell, what auction houses refer to as a "pass", and the rug was returned to the Hutchinsons, who then may have put it in a future auction.

We do know that an unidentified "Western" Museum purchased & then resold one such rug.

The floating hands appear in a number of Hutchinson designs, such as I Got the Best Man. The hands direct the viewer to the action. This rug also has a unique border, filled with fruits and veggies. 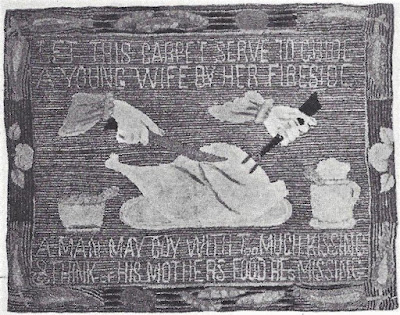 Catalogue Description: Health, Wealth and Happiness Rug - Indicated by a bag of cash, roast turkey and the hand of friendship and appropriate comments.

Interpretation:  Another rug that we don't have a photo. But here again, use your imagination. Would the bag of cash be similar to the one in I Bring You Luck, see top right corner. And this time, we're pretty confident that the rug had an inscription, as the catalogue makes note of "appropriate comments." 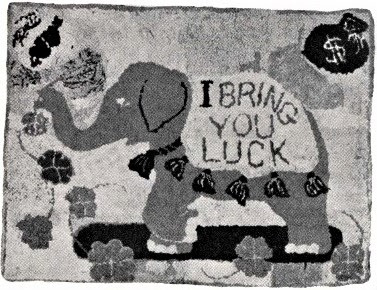 Interpretation:  While we don't yet have a photo of this rug, the Hutchinsons featured the hunting theme in a number of their designs. Here is one example of duck hunting... 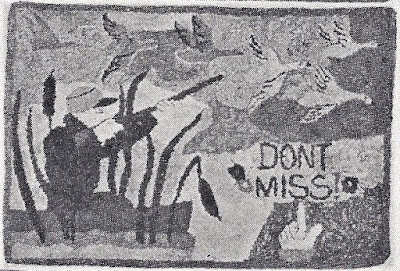 What We Don't Know, Won't Hurt Us

Catalogue Description: Ignorance is Bliss Rug - Depicting a fat turkey above a roast fowl between knife and fork; at centre the legend What we don't know won't hurt us.

Interpretation:  While we don't have a photo, from the description, we feel that the Hutchinsons seem to show sympathy for the turkey, but with a little tongue in cheek.

This 1st rug depicts 13 people grouped around an oval table. It appears that the wife is hiding behind the curtain - ruefully gathering strength to walk into the room and serve her extended family. Meanwhile, the various guests portray characters of all ages, fighting, fuming, flirting, gorging on food, gossiping and grandstanding—all oblivious of their unhappy hostess. This Hutchinson rug tells a complex and fascinating story. Can't you just hear all the nosy chatter? 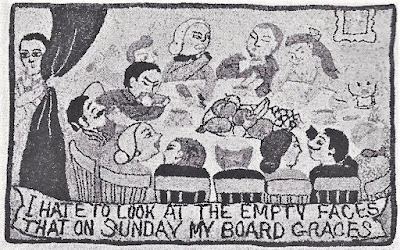 A kitchen scene with a woman working at a stove, a child carried under one arm, two other children are quarreling at left. All while her husband reclines on a couch. Note: the only thing missing, if this were a contemporary design, is a TV tuned to a football game. (Apologies to all the men out there who do the Thanksgiving cooking.) 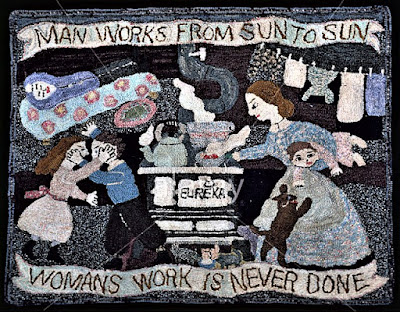 Do you own a Hutchinson rug?

Have you designed & hooked a contemporary Hutchinson-esque rug?

Be sure to send us a photo!

Have a Wonderful Turkey Day! 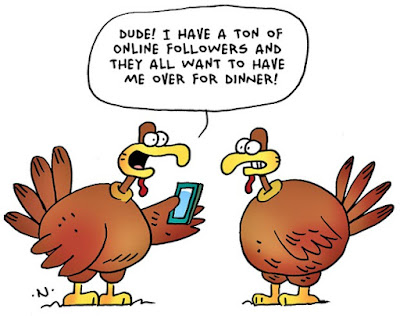 Posted by Kathy & Rug Hooking Traditions - Book Series at 9:59 AM No comments: