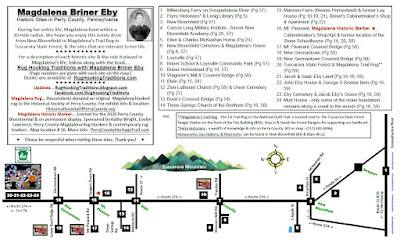 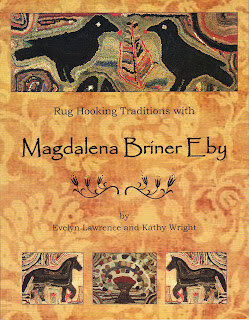 A map was included with each purchase of the book: Rug Hooking Traditions with Magdalana Briner Eby. If you purchased a book & would like an updated map, please fill out the Contact Us page & in the Comments/Question box, be sure to include: where you purchased the book, & ask for a... MBE Updated Map.

New places to visit on the updated map:

If you would like to visit additional sites on the 2020 Perry County Bicentennial - Heritage Trail, here is the link:  PerryCountyHeritageTrail.com

Please be respectful when visiting these sites.

A Dose of Hutchinson Humor…

With everything that is going on in the world today, this Hutchinson rug captures the current sentiment…

If you’re wondering…What inspired this rug’s inscription?
Take, Oh! Take Those Lips Away!

Here is a poem written by an anonymous poet…

Take, oh take those lips away,
That so sweetly were forsworn,
And those eyes: the break of day
Lights that do mislead the Morn;
But my kisses bring again, bring again,
Seals of love, but sealed in vain, sealed in vain.

It is said that this poem is often misattributed to William Shakespeare, who used it in his 1600s play titled --- Measure for Measure.

Shakespeare’s play was set in Vienna and the verse/poem was sung by a boy to Mariana in Act IV, Scene I. Mariana, the woman whom Angelo promised to marry before abandoning her, is reneging on his promise. The play’s overall tone was bittersweet and melancholy.

John Fletcher, a distinguished Jacobean playwright and poet, who even looked like Shakespeare, added a second stanza to the poem and used it in his own play in 1621, titled The Bloody Brother (also known as Duke of Normandy), in Act V, Scene II. It was later published as a stand-alone poem.


Take, oh take those lips away,
That so sweetly were forsworn,
And those eyes: the break of day
Lights that do mislead the Morn;
But my kisses bring again, bring again,
Seals of love, but sealed in vain, sealed in vain.

Hide, O, hide those hills of snow
Which thy frozen bosom bears,
On whose tops the pinks that grow
Are yet of those that April wears!
But first set my poor heart free,
Bound in those icy chains by thee.

But how did the 1st line of this verse inspire the Hutchinsons to inscribe it in their hooked rug?

Perhaps they were admirers of Shakespeare or Fletcher’s work. Another theory may be credited to song composer --- Roger Quilter. Quilter began publishing his song compositions in 1900. His compositions had a natural flow, nearly always enhancing the rhythm of the words, rather than forcing the words into a preconceived melody. One factor, which raises Quilter’s songs above the level of most contemporaries, is his choice of using poetry as the words in his melodies. One of his favorite poets was Shakespeare. In 1921, Quilter published the song, Take, o take those lips away, op. 23 no. 4, stanza 1 [voice and piano; voice and piano quartet; or voice, harp, and strings], from Five Shakespeare Songs (Second Set), no. 4, in London, England. 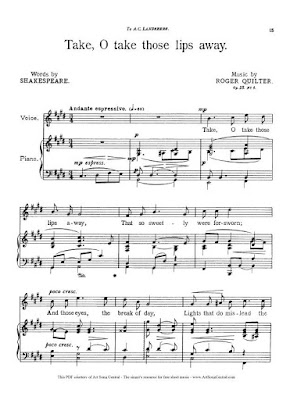 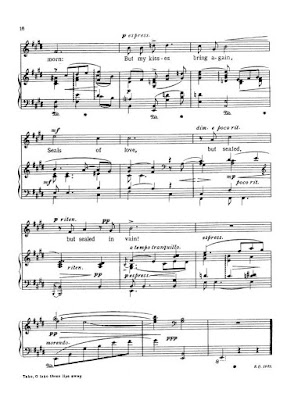 Since then and even today, the song has been sung by many singers around the world, and here in America.

Quilter composed more than 100 songs from 1900 through the 1940s. This particular song was popular in the 1920s. The Hutchinsons were producing and selling hooked rugs (with inscriptions) from the late 1920s to the 1950s.

Perhaps the rug’s inscription was inspired by any one or a combination of: the original/anonymous poem, Shakespeare's play, Fletcher’s play & poem – which the Hutchinsons may have read or seen performed in New York City, or they may have heard Quilter’s song – performed live, on the radio or phonograph. We will never know for sure, but you can enjoy the song, beautifully sung here by Mark Stone, click on photo caption.

What we do know, is that favorite Hutchinson themes include Courtship, Love, & Romance, often represented by troubles or challenges --- which are distinctively visible in both the hooked rug’s inscription and its pictorial scene, as the maiden holds up her hand in protest. 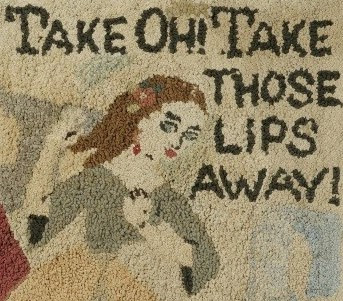 So now, while we are refraining from KISSING & HUGGING, don’t forget to do what the Hutchinsons did...
Add a DOSE of HUMOR to DAILY LIFE!

For more info on the Hutchinsons & their hooked rug collection: 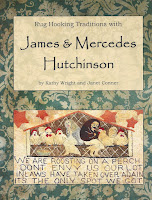 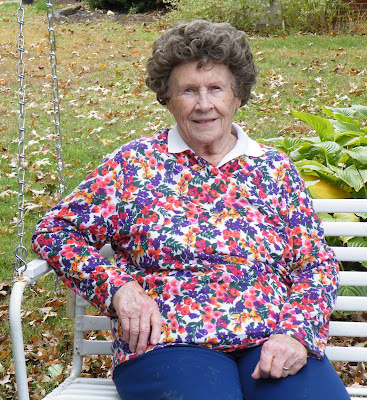 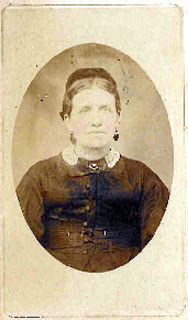 I remember that it was a beautiful autumn day when I met you. you were so very kind and generous to take me on a tour of Perry County, Pennsylvania, visiting so many of the places that were special to your great-grandmother - Magdalena Briner Eby.

Your generosity continued when you loaned me Magdalena’s hooked rug, along with her quilts, for the 2011 exhibit at Rug Hooking Week at Sauder Village – in Ohio...

and then supported our campaign to create a Magdalena Trail rug on the national quilt trail – at Tuscarora state forest. the very 1st hooked rug on the quilt trail!
I will always be grateful and appreciative of your contributions with documenting Magdalena’s life and hooked rugs. In addition to your contributions, there was considerable research, interviews & digging through archives, which resulted in our 2011 book ...
and the 2019 installation of our Magdalena historic marker on the Perry County (PA) Heritage Trail....
and Your recent donation of Magdalena’s hooked rug to Perry County --- a generous and significant contribution to your community & the rug hooking world...
Documenting the lives & hooked rugs of American textile artists is my passion. Along the way, I have had the opportunity to visit wonderful places and meet memorable people. You are a very special person!

I was so tickled when your family recently shared, with me, the video tribute from your 100th birthday. What an outstanding documentation of your life, your family, and so many wonderful memories.

In that video, I was proud to be standing next to you and Gregg during the 2011 unveiling of the Magdalena Trail Rug at Tuscarora state forest.
I feel very fortunate to have met you & be a recipient of your kindness, friendship & generosity!
Sending you – best wishes on your 101 st birthday! 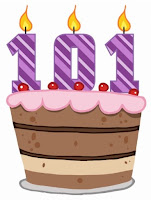 
(Be sure to click on all the links above for more info & photos.)
Posted by Kathy & Rug Hooking Traditions - Book Series at 2:22 AM No comments: 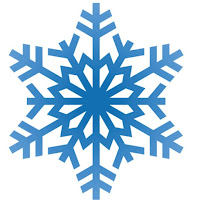 Print the Winter Special - Order Form & Mail it with your CHECK! 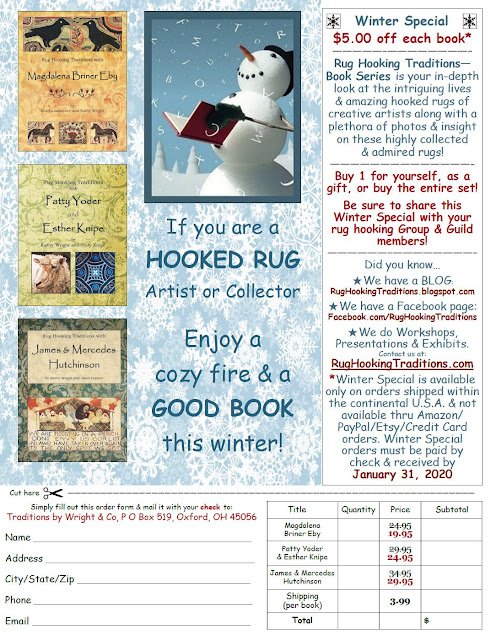 Have you seen the 2016 - HBO documentary: Nothing Left Unsaid: Gloria Vanderbilt & Anderson Cooper? At about 19 minutes info the film, Gloria recites a poem she wrote & there are 2 shots of hooked rugs in her Southampton, New York home. One of those rugs was "The Childrens Party" attributed to James & Mercedes Hutchinson.

You can view the documentary on Amazon or:  https://www.hbo.com/documentaries/nothing-left-unsaid-gloria-vanderbilt-and-anderson-cooper  Here is a snippet with the rugs...


See more Hutchinson rugs at this year's "Antique Hooked Rugs" Exhibit at Rug Hooking Week at Sauder Village, Archbold, Ohio, August 14-17, 2019. These Hutchinson rugs were not exhibited in the 2016 Hutchinson Exhibit. For more info on this exhibit:  https://saudervillage.org/classes-events/special-events/rug-hooking-week/exhibit/special-exhibits
Posted by Kathy & Rug Hooking Traditions - Book Series at 9:21 AM No comments:


In April, 2019.... The Historical Society of Perry County (PA) received a generous donation from the descendants of Magdalena Briner Eby. The donation was an original rug hooked by Magdalena. The rug is known as the "Great-Granddaughter's Rug", a title given to the rug in the book: Rug Hooking Traditions with Magdalena Briner Eby, in reference to it's owner at that time, see page 41.

This same rug was the highlight of the Feature Exhibit at Rug Hooking Week 2011 at Sauder Village in Archbold, Ohio. It was also the inspiration for the 1st Trail Rug on the National Quilt Trail, located at the Tuscarora State Forest, Perry County, PA. More about the Trail Rug in future posts.

What a wonderful & generous gift!

The rug will be on display soon in Perry County & also during the Perry County Bicentennial in 2020. The locations will be announced in future posts.

For more information on this donation:   https://www.rughookingmagazine.com/News/Magdalena-Briner-Eby-Rug-Donated-Historical-Society-Perry-County
Posted by Kathy & Rug Hooking Traditions - Book Series at 2:38 PM No comments: 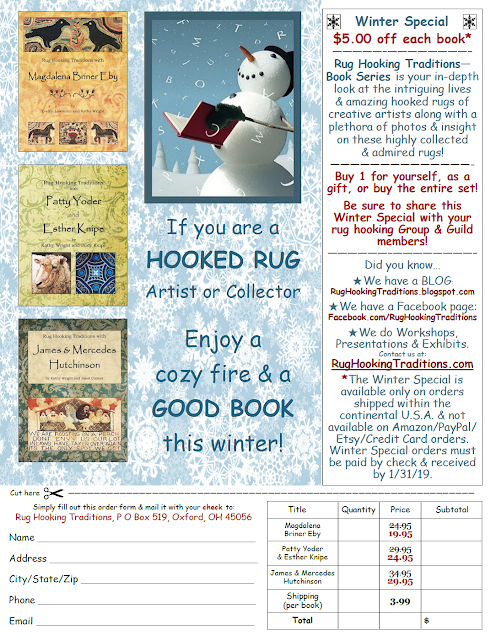 Posted by Kathy & Rug Hooking Traditions - Book Series at 3:11 AM No comments: