eBay Hooked Rug - Is it a Hutchinson rug or not?

Recently, I've been asked about a hooked rug which contains the inscription above & was listed (a couple of times) on eBay. I have commented on several Facebook pages that posted questions about it's authenticity & so I'm posting more info here on our Blog.

(This info may also be useful as a general guideline for those interested in purchasing antique or vintage hooked rugs. Number One, as a buyer --- "beware & be educated"... before you take the plunge. This posting is not an acknowledgement for or against the authenticity of this particular eBay rug, as I would need much more info & the opportunity to see the rug in person, to ascertain a conclusion.)

Here is the photo of the hooked rug listed on eBay: 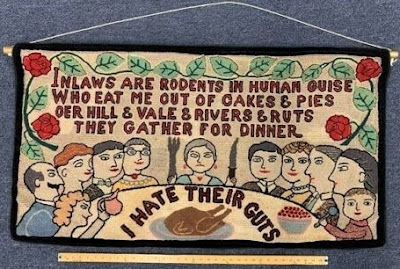 Below is a color photo of the documented hooked rug with that same inscription, which is attributed to James & Mercedes Hutchinson. This rug is in the collection of the Lightner Museum in St Augustine, Florida. It is often on display at the Lightner Museum (along with another Hutchinson rug titled: Man Works from Sun to Sun, Womans Work is Never Done), it's a great place to visit. The Lightner Museum was kind enough to loan both hooked rugs to me for the Rug Hooking Week 2016 - Feature Exhibit: James & Mercedes Hutchinson, at historic Sauder Village in Archbold, Ohio, where it hung along with many other documented Hutchinson rugs which were borrowed from museums & private collectors. Rug Hooking Week is celebrating it's 25th anniversary in 2021 with extensive exhibits, classes & vendors --- a fabulous event to develop skills & knowledge about rug hooking. 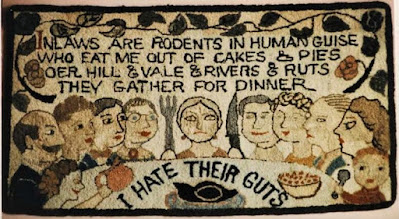 Below is the black & white photo of the same documented rug from the February 11-12, 1944 Parke-Bernet Galleries Auction Catalogue #529, where it originally sold for $150. This same black & white photo appeared in Hobbies Magazine in September, 1961. Otto Lightner, of the Lightner Museum, was the editor of that magazine. 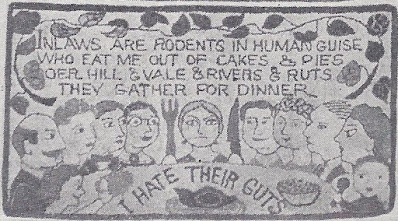 So, take a close look at both rugs. The most obvious difference is on the platter in the forefront. In the documented rug, it looks more like a BIRD or CHICKEN, while the eBay rug looks more like a TURKEY. Then, there are a multitude of differences in the vine & flowers, lettering, people, colors, materials, etc. Over the many years of researching the Hutchinson & examining their rugs, I have discovered many distinctive characteristics, and so has my co-author Janet Conner, who both teaches Hutchinson techniques & restores rugs.

While the Hutchinsons did produce some duplicate hooked rug themes & designs... much more research would need to be done on the eBay rug, before a conclusion could be reached. For example, I would need to see the rug & the fabrics, as well as research any provenance.

While not a duplicate of the Inlaws are Rodents rug, below is a comparable Hutchinson rug with a very similar group of family or friends gathered around a table, filled with food. This time, "Inlaws" are not directly mentioned in the inscription, but instead inferred, along with a similar sentiment. 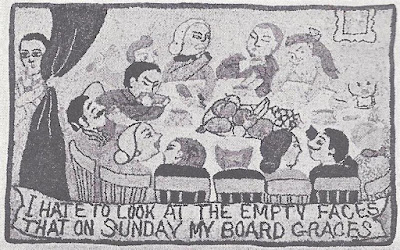 Themes... Yes, the Inlaws rug is humorous, as are many of the Hutchinson rugs. James & Mercedes are known for expressing the whims and quirks of human relationships. Their wry humor is reflected in the melodramatic expressions and actions of the leading characters, frequently firemen, sailors, and romantic couples. The Hutchinson designs provide universal insight into the "human condition" - all of which are expressed through the medium of textile art! As a dog lover, here's one of my favorites... 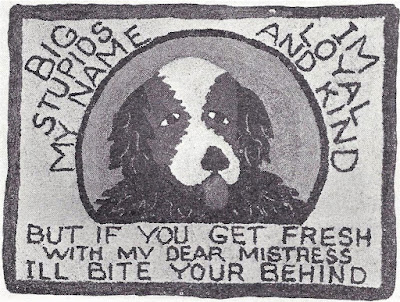 In the eBay listing there were a couple of cautions, one being, only one photo was provided. Typically, sellers/antique dealers/auction houses provide a number of photos of the front & back, plus up-close photos. They also list, in detail, the condition of the piece & info on any repairs/restoration. And finally, the eBay listing had a "no" return policy.
As for pricing... Authenticated & non-authenticated Hutchinson rugs have sold for anywhere from $150 (Art Institute of Chicago recently sold Shine Out at auction) to $10,000 (Celebrity Dick Button recently sold his The Ice Is Thin at auction, after it was part of the ART OF FIGURE SKATING THROUGH THE AGES:
THE DICK BUTTON COLLECTION at the Fenimore Art Museum in Cooperstown, New York). But, most sell in the $1000-$4000 range, unless they have an outstanding & documented provenance, notable owner, have been well exhibited &/or published, or simply are an outstanding piece of Americana Folk Art---through design, color or overall appeal. So the asking price of $6000-7000 for the (unauthenticated) eBay rug was rather high.

Another "buyer beware" to consider before purchasing (unauthenticated) Hutchinson Hooked Rugs... A number of the Hutchinson rug designs were made into & sold as commercial rug hooking patterns, while others were simply copied & hooked from auction catalogues or publications (such as Hobbies Magazine, Joel & Kate Kopp's book - American Hooked & Sewn Rugs, The Rug Hooker News & Views-now called Rug Hooking Magazine, Hooked Rug Treasury by Jessie Turbayne, & Hooked Rugs by Leslie Linsley), mostly during 1930-1970s. While other Hutchinson designs are still available today as commercial patterns & are being hooked by contemporary rug hookers. For example... Joan Moshimer's hooked: Over The Bounding Wave, What Could Be More Delightful, To the Eyes Of A Lonely Sailor Man, Altho Thir Snares Are Spiteful, and published a photo of it in her 1970s book The Complete Book of Rug Hooking & offered the pattern in her Primitives pattern catalog. The Over The Bounding Wave design/pattern was very popular & still is. It is currently available through W Cushing & Co. as the Mermaids. So, there are many rugs out there in antique shops, auction houses & on the internet that were hooked by contemporary artists & are "not" attributed to the (documented) Hutchinson collection. Again "buyer beware & be educated". 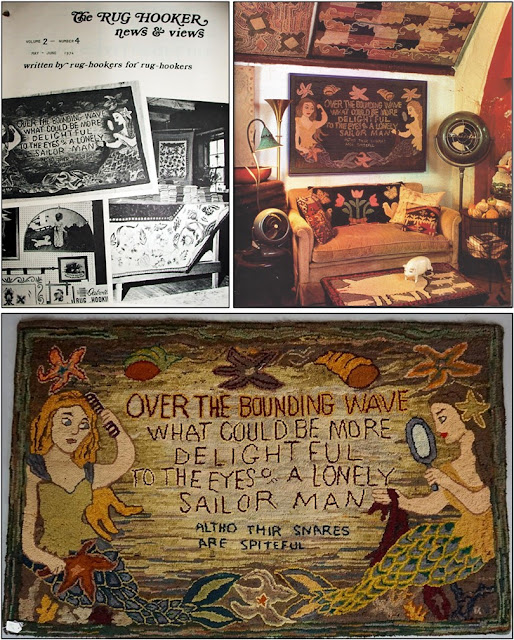 Top left:  A contemporary version of Over The Bounding Wave appears on the cover of The Rug Hooker News & Views, May/June 1974.
Top right:  In 1992, this photo appeared in Leslie Linsley's book Hooked Rugs. Over The Bounding Wave is hanging in the home of Barbara (Christina) Johnson, a notable hooked rug collector in Princeton, New Jersey.
Bottom: This version was sold at auction in 2019.
Were any of the above rugs the true Hutchinson rug? It is unknown. The Hutchinsons sold the original rug at the Parke-Bernet Galleries Auction on October 27, 1948. The Lot # 89 description did not give any information on the colors, only that it depicted two mermaids with mirror and comb, along with inscription & size. So it's still a mystery!
Questions... If you are thinking of purchasing a hooked rug attributed to the Hutchinsons, think you already own a Hutchinson hooked rug, or need it restored & would like more info, please contact us at RugHookingTraditions.com We also provide presentations & workshops to groups, guilds & organizations.
Read more about it... from the interesting Hutchinson family, their famous Barnum, Bailey & Hutchinson Circus background, to the THOUSANDS of documented hooked rugs attributed to James & Mercedes.... many of which are uniquely HUMOROUS.... check out the book! 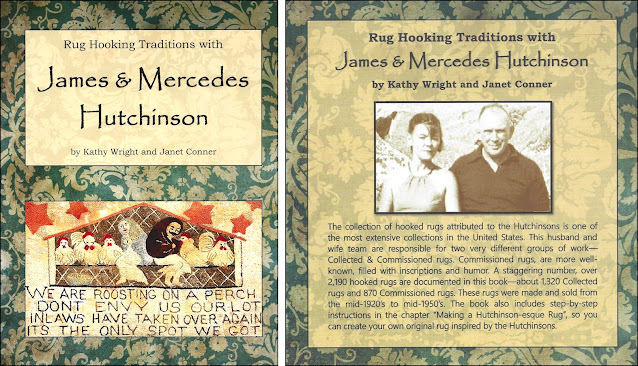 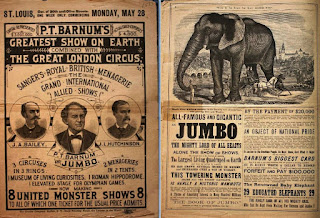 Hook a Rug... The book also offers a section on techniques & tips on how to design & hook your own Hutchinson-esque Rug, written by Janet Conner. Below is one of Janet's Hutchinson-esque hooked rugs.... 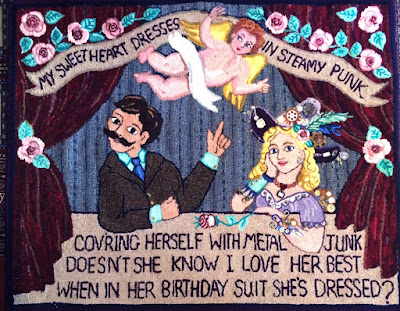 Posted by Kathy & Rug Hooking Traditions - Book Series at 12:27 AM