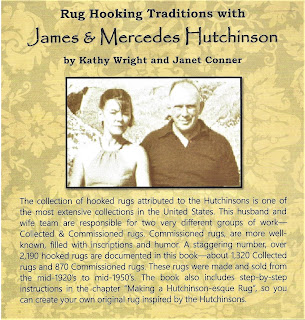 When each Rug Hooking Traditions book went off to the printers, that was not the end of the research or the discoveries, by far. For James & Mercedes Hutchinson, Kathy has put in more than 15 years of digging through archives, interviewing authorities, & meeting with rug collectors. One of the topics, that has taken a full 15 years, was to find out if this couple was "legally" married…. or just claimed to be! On the evening of July 20th, the official document arrived via email, from a lovely New Jersey genealogist named Debbie Hadley. (Thank you, Debbie!)

The recent discovery, was possible because of an Ancestry.com update for the New Jersey Marriage Index. (Did you know that the Genealogy websites periodically add & update info & records?) The update was in late 2019 or early 2020. In the NJ Index, Kathy found a Hutchinson marriage in 1920. She had already narrowed down the marriage timeframe to 1920-1924, so that was promising, but there were a number of inconsistencies in the New Jersey (transcribed) info. She hoped that the original (hand-written) document would reveal the correct info, leading to our couple.

Then COVID hit & all the government archives were locked down & we would just have to wait until they reopened, which they did, just last week. Debbie, the genealogist, contacted Kathy & said she would make the trip to the New Jersey state archives & see what she could find. voilà, here is James & Mercedes’ Certificate & Record of Marriage…. 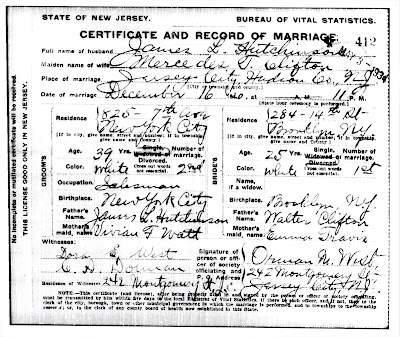 Looking at this document, and comparing it with our other findings, we will try to re-create this auspicious event in this couple’s life…

Mercedes was 24, single & this was her first marriage. At the time, she was living wither her mother Emma (Travis) Clifton, sister Dorothy (age 28), & brother Robert (age 22). Her father had passed away 7 years prior, in 1913. The family rented a place at 284 14th Street in Brooklyn, New York.

On their wedding day, 101 years ago, James & Mercedes probably took a ferry from New York City to the Jersey City Station, because the Holland Tunnel had only begun construction in 1920.

Holland Tunnel - Before the Holland tunnel was constructed, residents of New York and New Jersey seeking to cross the Hudson River used ferries which carried vehicles onboard. At the turn of the century as automobile ownership became more common, up to 30 million vehicles were transported across the Hudson using ferries. In 1920 the New Jersey Interstate Bridge and Tunnel Commission and the New York State Bridge and Tunnel Commission allocated funds for the creation of Holland Tunnel, then referred to as the Hudson River Vehicular Tunnel project. Initially, it was thought that building a bridge would be the most practical and affordable solution to connect New Jersey and Manhattan. However, commercial ships required a minimum clearance of 200 feet, and since the Manhattan side of the Hudson River did not have sufficient clearance to meet this requirement, it was determined that a long approach to the bridge would also be required. Since a long approach to the bridge on the Manhattan side would not be feasible, in 1913 it was decided that a tunnel was the best method of achieving the desired result.  The Holland Tunnel construction started in 1920 and was completed in 1927. 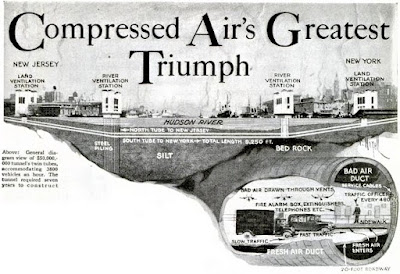 Jersey City - The Pennsylvania Railroad Station was the intermodal (2 or more modes of transportation) passenger terminal for the Pennsylvania Railroad's (PRR) vast holdings on the Hudson River and Upper New York Bay in Jersey City, New Jersey. It was one of the busiest stations in the world for much of the 19th century. The rail terminal and its ferry slips were the main New York City station for the railroad – as you can see in the photo below, it was quite impressive. The PRR referred to the location simply as "Jersey City." 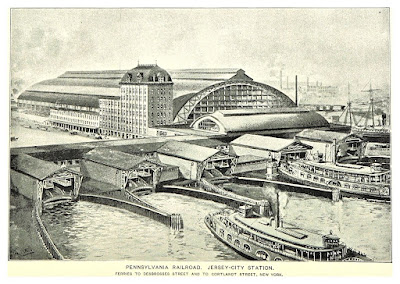 So which ferry did they take? It may have been the New Brunswick, photo below, owned by Pennsylvania Railroad.

Jersey City Ferry - a major ferry service that operated between Jersey City in New Jersey and Cortlandt Street in lower Manhattan for almost 200 years (1764-1949). The ferry transported people & vehicles, & was notable for being the first to use steam power, which began in 1812. 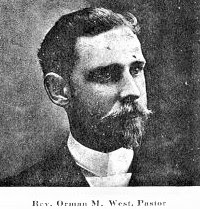 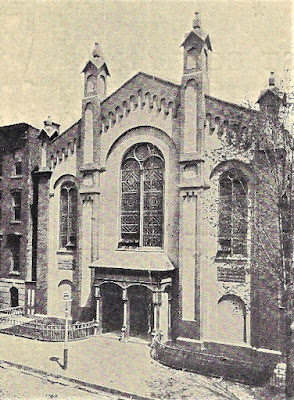 If you recall, James eloped with his 1st wife Clara (Britton) & they were married by Rev William C McKnight at the Presbyterian Church in Greenport, Long Island, New York. Greenport was just across the bay from Shelter Island, where both their parents had summer homes. Below, a charming photo of James, Jr. & Clara, along with a newspaper clipping covering their romantic elopement... 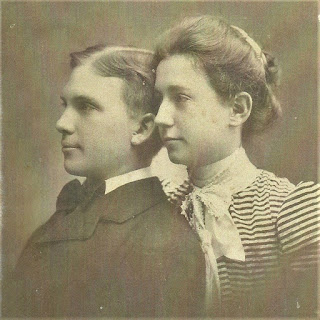 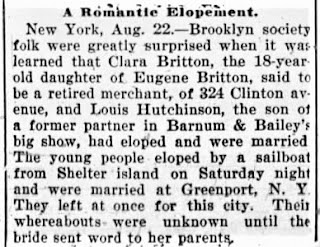 So, his 2nd marriage to Mercedes may have been rather impulsive too, as the Certificate states --- they were married at 11pm on December 16th. The 1st question is… “Why so late?” and the 2nd more humorous question… Were the good Reverend, his wife, & father-in-law roused out of bed & in their Pajamas during the marriage ceremony? Or was this simply a typo, and the recorder meant to write 11am? And yet another question pops to mind… Did any of the couple's family or friends accompanying them at this marriage ceremony? Probably not, as they would have typically been the witnesses, instead of the Reverend’s own family filling that role. Again, much like James’ first marriage MO (modus operandi) & elopement – It all seems impulsive, mysterious & adventurous!

There are some details that we can’t confirm & we may never know. But this wonderful discovery does confirm... Yes, they were "legally" married & there are many first-hand life experiences that led to the Hutchinson’s humorous hooked rug designs & inscriptions – especially relating to LOVE, ROMANCE, & MARRIAGE.
Of which, here are some charming, cantankerous, bold & wary examples – especially for that timeframe - 1920s-1940s. These hooked rug “photos” were discovered after the printing of the book, but the titles & info were included in the book.
We hope that these Hutchinson Hooked Rugs give you a chuckle…. Enjoy! 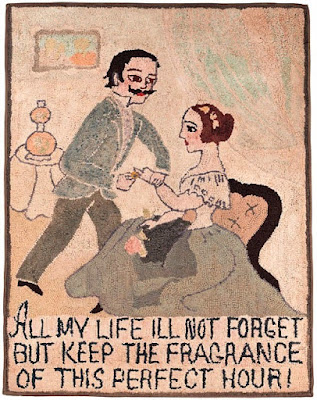 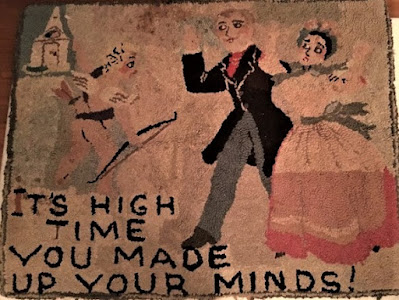 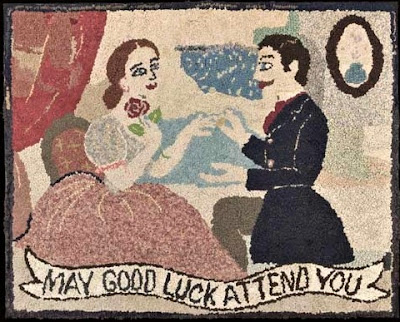 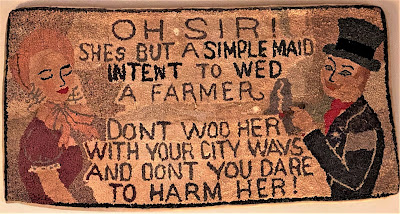 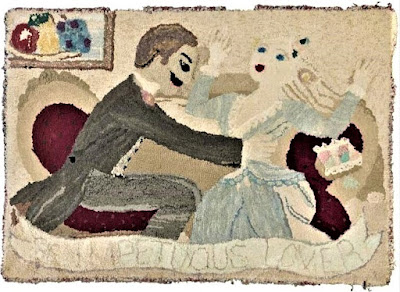 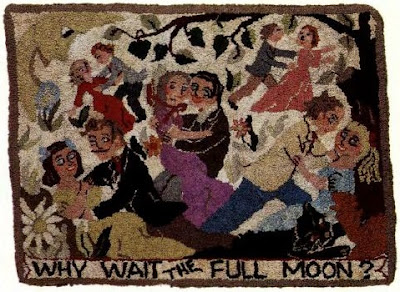